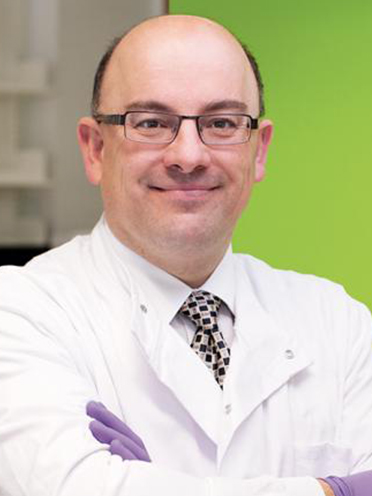 Professor Johann de Bono is Regius Professor of Cancer Research and Professor in Experimental Cancer Medicine at The Institute of Cancer Research and Royal Marsden. He is the Head of the Division of Clinical Studies at The ICR and the Director of the Royal Marsden Drug Development Unit, leading the NIHR Experimental Cancer Medicine Centre team. He also leads the London Movember Prostate Cancer Centre of Excellence.

He has led on multiple trials that are impacting the standard of care for prostate cancer, including trials of the ICR-discovered drug abiraterone, cabazitaxel, enzalutamide and olaparib and more recently the AKT inhibitor ipatasertib and PSMA Lutetium. He has published more than 500 manuscripts including multiple publications in the New England Journal of Medicine and The Lancet. He has led on the study of circulating tumour cells, whole blood expression profiling, and circulating tumour DNA in metastatic prostate cancer patients. He led reports on the importance of germline and somatic DNA repair defects in lethal prostate cancer and co-led studies that have mapped the molecular landscape of lethal prostate cancer, and shown how circulating biomarkers can be used as a multi-purpose biomarker for managing this disease. He runs a laboratory focused on biomarker analyses supporting anticancer drug development.

Professor de Bono graduated from the University of Glasgow medical school in 1989, graduating as a Member of the Royal College of Physicians (MRCP) in 1992. He was awarded a four-year Cancer Research Campaign Clinical Fellowship, which allowed him to pursue a PhD between 1993 and 1997. He trained in medical oncology and was awarded an MSc (Cancer Sciences) from Glasgow University. The Royal College of Physicians and Surgeons of Glasgow then awarded him a travelling scholarship that allowed him to pursue further research on the challenges of clinical trial design at the SWOG statistical headquarters at the Fred Hutchinson Cancer Centre in Seattle, USA in 1999. Between 2000 and 2003 he then pursued further research developing novel anti-cancer drugs at the Institute for Drug Development within the University of Texas Health Science Centre at San Antonio.

In 2003 he was elected a Fellow of the Royal College of Physicians, and in 2009 he was elected as a Member of the Malta Order of Merit. Professor de Bono received the prestigious ESMO Award in 2012 and was part of the ICR/RMH team awarded the AACR Team Science Award. He also received an award from the Royal Society of Chemistry for his team’s work in developing abiraterone. In 2016 he was named Regius Professor of Cancer Research, a rare award bestowed by the Sovereign by Royal Warrant to recognise exceptionally high-quality research at an Institution. He was awarded the 2018 AACR–Joseph H. Burchenal Memorial Award for Outstanding Achievement in Clinical Cancer Research. The award is a significant mark of esteem for Professor de Bono and recognises his outstanding and world-leading research in the clinical development of cancer treatments.